BUILDING ON A DREAM MUSIC BLOG

In historical context, the spirituals transcended and survived societies one sided reflection of history in a time period that would not allow the slaves who created the spirituals to have a voice. Therefore the essence and secret intent of the spirituals were hidden in plain view in order to preserve and document the history of the slaves existence in America. We all have the need to feel valued and know that at the very least our collective story will remain for future generations to study. The slaves were no different, they just couldn’t tell their story out right in their life time for the world to see. They were depending on each other orally to keep their history alive for future generations. Although we don’t know the individual names of the slaves who created these beautiful spiritual songs, the spirituals represent one of the deepest raw expressions of the human spirit ever created on American soil or the world for that matter. What is so important about preserving the spirituals is not only what these songs did for our nation but also recognizing the enormous contributions the slaves in America made to ensure the birth of our nation. We must never forget the strength and courage of our slaves brothers and sisters who actually survived the atrocities and dehumanization of slavery. And once free were faced with a new set of unjust American laws meant to continue to dehumanize a people for the color of their skin. As survivors, unfazed and unbroken they took the fight for justice forward.

Many American heroes have expressed the value and importance of the old spirituals and what the songs meant to them. In his book, Why We Can’t Wait. Dr Martin Luther King Jr. stated “An important part of the mass meetings was the freedom songs. In a sense the freedom songs are the soul of the movement. They are more than just incantations of clever phrases designed to invigorate a campaign; they are as old as the history of the Negro in America. They are adaptations of the song the slaves sang— the sorrow songs, the shouts for joy, the battle hymns and the anthems of our movement. I have heard people talk of their beat and rhythm, but we in the movement are as inspired by their words. “Woke Up This Morning with My Mind Stayed on Freedom” is a sentence that needs no music to make its point. We sing the freedom songs today for the same reason the slaves sang them, because we too are in bondage and the songs add hope to our determination that “ We shall overcome, black and white together, We shall overcome someday.”

The famous musician, composer, & music producer Quincy Jones stated, “A lot of history is in the words, and some words don’t mean what you think. The true history of Blacks is not in the history books but in our music”. For additional information visit https://www.calvinearl.com 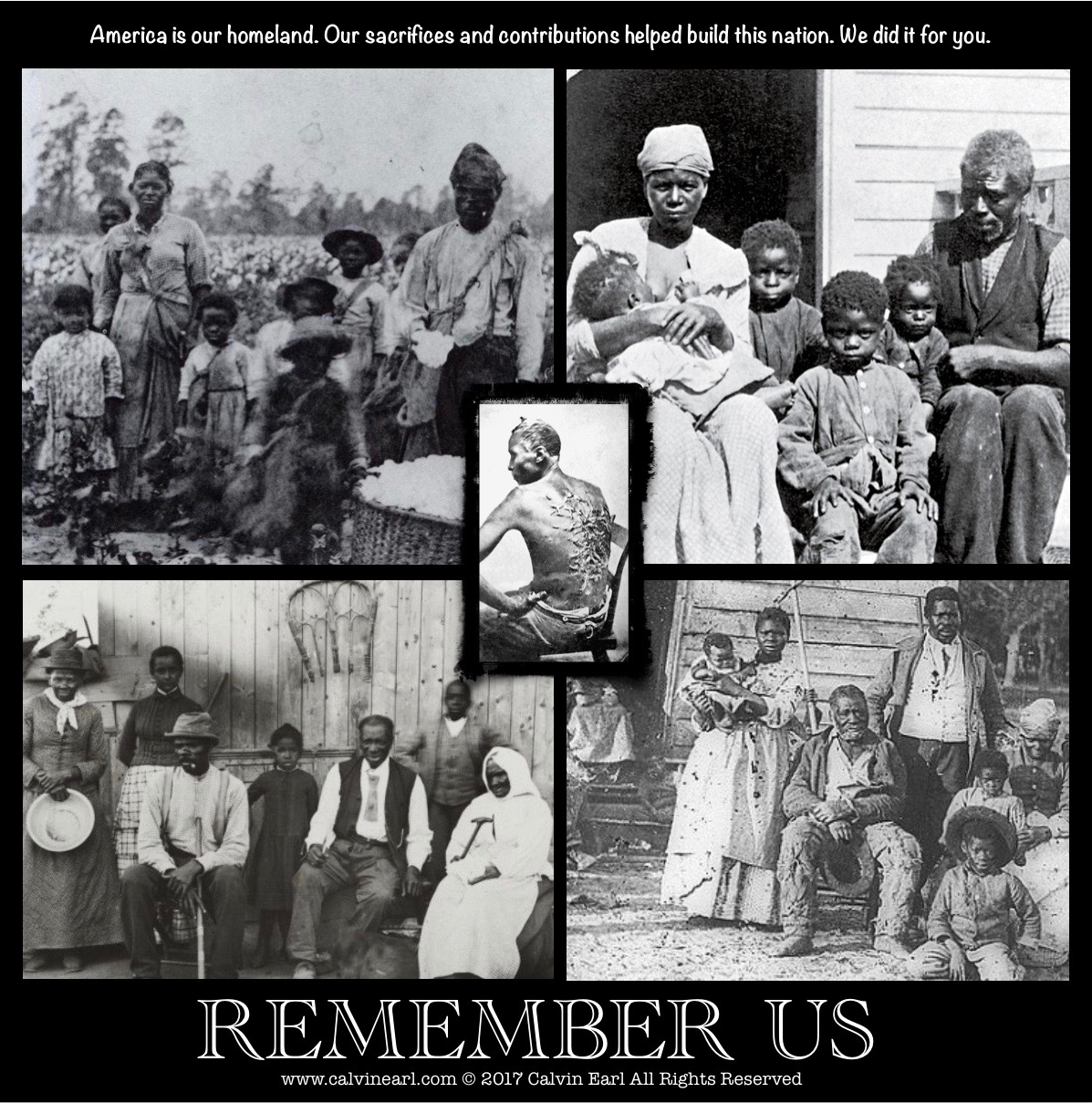 Are we forgetting and leaving out some of the sacred voices of all our ancestors? When you don’t know your history, you don’t know your ancestors fortitude, or their inspiring determination to get right back up when they failed, or their triumphs, or their powerful spirit that succeeded in overcoming the impossible in a flat world of boundaries and limitations. If we don’t know where we came from how can you possibly know who you are or where you are going? The intention of our nation as a democracy was for all people in our nation to live free, and have the right to pursue “those truths to be self-evident, that all men are created equal, that they are endowed by their Creator with certain unalienable Rights, that among these are Life, Liberty and the pursuit of Happiness”.

The real truth is, from the beginning of this “great experiment” just staying alive, finding fresh water to drink, food to eat, shelter from the elements, and a spirit so strong to build a new nation it took an immeasurable amount of determination, courage and working together to accomplish their goals. All our ancestors together endured unspeakable hardships, no matter how they got here willingly or by force. These ordinary folks worked hard, and sacrificed much to build this nation and when greed and corruption set in, they set out to correct the greed of a few and abolish the evil institution of slavery that threatened the very foundation of the values this nation was built on. All our ancestors gave us our fundamental God given freedoms as human beings including our slave brothers and sisters, the abolitionists, the founding fathers, pilgrims, the Revolutionary War patriots, the Union Army soldiers, and yes even the Confederate soldiers who fought but lost a lifestyle of values that served only a few citizens not the values we set forth as a new nation.

Our ancestors built a nation where we value the ideals that no human beings are less or more than another, because we believe each person’s creative and inventive ideas and contribution will make the world a better place for all of us. Regardless of whether the immigrants who came to America willingly or by force they all gave their blood, sweat and tears to build a nation for, of and by the people. The American story is not a black story or a white story, it is a ‘WE THE PEOPLE’ story. They all built a country together because their lives depended on it. I don’t know about you but I believe today we have a lot more work to do. Slavery has turned into racism, not freedom’s song. There is no reason for any of us to be slaves to corporate greed and fear mongering that would choose to divide us as a nation and make the world unfit to live in. We all belong to one race: THE HUMAN RACE. We are better together as a united nation, knowing this country belongs to all of us and it is our diversity that gives us pride, strength and an innovative edge to breakdown the boundaries that challenge us today. We must honor all of our ancestors, not just some. We are following in the footsteps of extraordinary human beings who took a bold and courageous idea and chose to believe in the kindness and loving nature of the human spirit and that our Creators unalienable Rights belong to all of us together as Americans.

Wade In The Water is one of the spirituals that has many secret codes embedded within the song that was used to give guidance to the slave as he embarked on his journey to freedom on the Underground Railroad. The lyrics in this spiritual talk not only about the religious ceremony as it pertains to the Christian Church where the religious rite of sprinkling water onto a person’s forehead or of immersion in water, or as John the Baptist baptized people in the river symbolizing purification or regeneration and admission into life as a Christian. ‘Wade in the water, ‘God’s gonna trouble the water’ for the slaves trying to escape from slavery on the Underground Railroad, meant the first thing the slave master would do would be to send out the bloodhounds to track the slaves down. The bloodhounds could track the slaves easily on land, but the lyrics “God’s gonna trouble the water” tell the slave to actually find a body of water and then walk or wade in the water in that way the bloodhounds would lose the scent of the escaping slave and the slave would be safe from the dogs tracking them down.

Also in the lyrics ‘See that band all dressed in red, looks like the band that Moses led’ -It is thought that the lyrics reference Harriet Tubman whose nickname was ‘Moses of her people’. Many of the spirituals lyrics have dual meanings in the songs and in this song Moses and Harriet Tubman’s names are interchangeable because Harriet like the story in the Bible where Moses led the slaves to freedom, Harriet did the same for the slaves in the 1800’s in America.

In the last verse of Wade in the Water the lyrics are: If you don’t believe I’ve been redeemed, follow me down to Jordan’s stream – In the Bible there are several references to the Jordan River, and what the Jordan River meant to the slaves here in America was the secret code name for the Ohio River. If the slave could get across the Ohio River he or she would be free.

It is also noteworthy to hear the tone of the lyrics in ‘if you don’t believe’ was meant to be a dare or a challenge for you to face your fears because if you cross the river you will be free or as the slaves put it you will be ‘redeemed’. The spirituals including Wade in the Water all have this sense that the slave is trusting God to deliver justice either now or in heaven and that they believed and found real hope in God’s promise that if ‘you ask it shall be given’. Download my CD “GRATITUDE” a collection of spirituals for your enjoyment:  https://store.cdbaby.com/cd/calvinearl

I thought it would be fun to share with you part of a letter I wrote to update my fans on my work to preserve the African American Spirituals as a National Treasure back in 2006 and 2007. It was without a doubt an adventure of a life time. I believed in my dream to have the United States government honor our slave brothers and sisters for their contributions to our nation and ensure the spirituals were preserved as an American National Treasure. I trusted with God’s guidance and help I could accomplish my goal and then I just went for it, staying focused until I succeeded in accomplishing my goal. Here is part of the letter I wrote to my fans at the end of 2006! I hope you enjoy the letter! Peace and love all around Calvin Earl

“I will be sharing with you my efforts & personal journey as I continue to invite the US Congress to preserve the African American spirituals as a national treasure. In addition I will also share with you my experiences as I take my one-man show “Gifts From My Ancestors” across America in hopes of drawing national attention to the extraordinary legacy of our ancestors.

I’m pleased to report that on March 28, 2006 United States Senator Robert Menendez (NJ) submitted to the Senate, Senate Resolution 407 to declare the African American spiritual a national treasure. And on May 2, 2006 the twin resolution was submitted in the House by Congresswoman Rosa DeLauro (CT) & Congressman John Lewis (GA) House Resolution 790.

In my efforts so far I have also obtained 113 cosponsors for this legislation in the House including the Speaker Of The House, Nancy Pelosi and the entire Congressional Black Caucus & 10 cosponsors in the Senate including Senators Barack Obama, Hillary Clinton, Edward Kennedy, Elizabeth Dole, and Joe Biden just to name a few.

This landmark legislation is vitally important because without it, we as citizens of this nation stand to lose a significant historical segment of our national heritage. This legislation provides our nation the opportunity to recognize and honor the former enslaved African Americans for their contributions to our nation including the historical significance and beauty of their original music best known as the African American Spirituals with our deepest gratitude and respect.

Today you and I are faced with a choice. Do we or don’t we preserve the African American spirituals as a national treasure? I say we must. And I invite you to join with me to ensure the original music and the oral history created by the slaves are included in our history books and that they are held in the highest esteem as an American national treasure. I believe it is time we honor all of the gifts from our ancestors.”